This was a fan request made to me. So upon taking up this request. I decided to watch legends of the dark king (dubbed version). And to say the least it was a pleasant watch.

Plot: A global-scale nuclear war has transformed most of the Earth into a barren ocean-less wasteland, resulting in the downfall of modern civilization and a return to a lawless age of barbarism. The survivors of mankind begin to fight each other over the limited supply of uncontaminated food and water still left in the world. The strong ones begin to band together in gangs and armies, fighting each other over territory, while oppressing the weak. A man named Raoh appears, seeking to establish order in the post-apocalyptic world through his mastery of the assassination art of Hokuto Shinken. With the help of his childhood friends Reina and Souga, Raoh takes on the mantle of the “King of Fist”, as he gradually extends his reign, recruiting new allies in the process, while fighting against rival warlords who seek to challenge his authority.  – From Wiki.

Well if you’re not familiar with the fist of the north star anime, then this series will be confusing to you. This series is a side story to the original. And it focuses on Raoh, the elder brother of Kenshiro, the protagonist of the original series. Hokuto Shinken is a very old assassination technique that focuses on the 708 pressure points on the human body – by manipulating the pressure points, they effectively kill from within. This fighting technique is so deadly, that it can only have 1 true successor. It does have a rival technique. That is briefly mentioned in this series. It’s more extensively explored in the north star manga / anime.

As the plot states, Raoh is hell bent on establishing a new reign of order in this chaotic, desolate world. Using the hokuto shinken fist to help him establish this. He takes up the mantle Ken-Oh (King of fist), with the help of Souga and Reina. He faces warlords that have their own unique fighting techinques. However they pale in comparison to the most powerful fighting technique of all. And fall before the king of fist. With Raoh quickly establishing his reign, this goes unnoticed as other more powerful warlords are beginning to take notice. It would have been inevitable to not face the king of fist at some point. 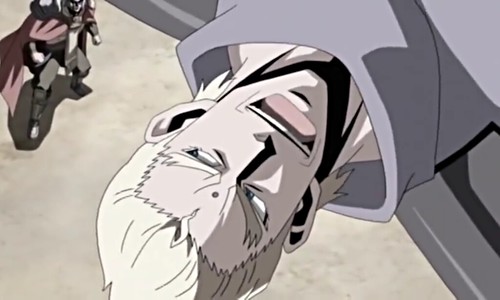 Raoh for the most part had zero development. His stoic, unyielding character is a necessary one, since he is a opponet for Kenshiro in the main story. However he does show signs of actually caring. Though his tough, stoic demeanor hides it. He being over powered is by no means accidental. As a student of hokuto shinken, and almost being the successor to it. Every fight he ever had, didn’t last long. In fact he is just a repetitive character. Looking for the strong and then obliterating them. He did have one major fight with Souza. The fight didn’t last long, it was way too short. And this with two of the most powerful characters in the entire fist universe, clashing.

Souga, is an interesting one. He is the strategist in Raoh’ army. He is also known as Souga the fleet foot and master of the mount swan kick. He sacrificed his foot in Cassandra, whilst trying to escape from the booby-trapped tower. And replaced it with a prosthetic one. At first he was a merciful strategist. Sparing any man who would pled for their lives. But that slowly changed. Roughly the same time when Raoh decided that he will throw away his compassion and lead via an iron fist. Souga too, threw away his compassion. He justifies this by thinking he is doing this for the sake of Raoh. This upset his sister greatly.

Reina is a weird one. As a capable warrior, she doesn’t lack the resolve of killing someone – when need to. But yet knows when to show mercy. And doesn’t lose this characteristic. Unlike her brother and Raoh. You could say they were protecting her from the bloodshed that they were willing to commit. So that she doesn’t have to. She doesn’t get any character development either. But she does develop strong romantic feelings for Raoh. And she ain’t the first either. Whilst Raoh isn’t afraid of falling in love, he’s just isn’t in to her. As he is stoic about his feelings for her. So it’s not resolved.

Sakuya is pretty much like Reina. She too falls in love with Raoh. However in terms of strategist, she is equal too or even better than Souga. As she can predict things in advance. And can create plans around them. She is the mystery in the group. As she just turns up and kneels in front of Raoh. I don’t think she got enough screen time or development. As I found her the most interesting.

The problem with this show, is that it got repetitive at times. Waging war after war, whilst introducing and mentioning characters that are from the main story line briefly. The fights didn’t last long. One thing I didn’t understand. Raoh can punch through walls, like he did at Cassandra. But couldn’t punch through a heavy door?. Such inconsistency there. I can understand that the story is a just a side story. But I don’t think it had enough time to fully develop some of the newer characters. As there were pretty interesting. It relies too much on the main story line. For the viewer to know what is going on. The ending was questionable.

The series as a whole boasts some strong, diverse characters. It can be confusing at times, since there are multiple variations of different fighting techniques. Or schools. But that shouldn’t be off-putting.