Is it wrong to try and pick up girls in a dungeon? or Danmachi for short. Is your typical shounen show. With heavy RPG elements. And a little sprinke of action. And girls. And a bit more action. And a lot more girls. Such life…..

Commonly known as the “Dungeon,” the city of Orario possesses a huge labyrinth in the underground. Its strange name attracts excitement, illusions of honor, and hopes of romance with a pretty girl. In this city of dreams and desires, new adventurer Bell Cranel has his fateful encounter with the tiny Goddess Hestia.

Danmachi’ narrative isn’t unique, it’s pretty straight forward. And it makes no qualms about that. A coming-of-age story, set in what appears to be in the medieval era. Where gods and goddess once ruled from the heavens, but now live amongst their ‘children’. To be more precise, chosen adventures.

The story is reminiscent of an RPG. Where the gods or goddess guides their chosen vassal in to doing great deeds. Which is pretty standard stuff. Whilst it being predictable, I did enjoy the charm the series has. Which is one of the plus point going for it. However, the episodes in general…were pretty aimless. Not only that they gave off the impression that they were more episodic than anything. They ended up serving no purpose what so ever. Whilst it had this over arching story. It wasn’t engaging or memorable – completely irrelevant in the later half of the series. Not to mention suffering from plot holes. With very  very little to no exposition dump been given.

Which is what Danmachi unfortunately suffers from. A solid story.

Bell and Hestia designs were pretty appealing and they stood out. Especially our loli-goddess with her over sized breasts, that blue boob string and extremely short white dress. Bell with his white hair and red eyes. And the designs matched their personalities. The rest however were pretty much standard designs. And forgettable. Which is a shame.

The art is pretty much standard-fare. They did have some really nice choreography thrown in. But other than that. The series really does lack any signature. If I really had to pay any mayor attention to detail at all. It has to be the background / world. It had that air of where you can believe the world is alive and breathing. Too bad the majority of the characters art were just bland. 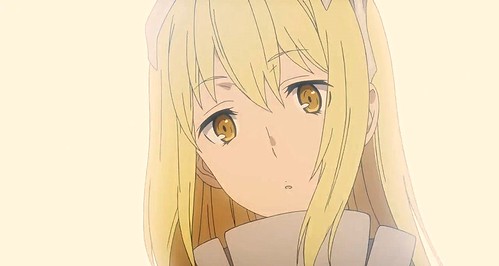 Bell had the most growth (and the most women falling for him). As he is the main lead. The negative to that is that he had an insane level of development. To the point of where you could say he is over-powered. From being a low level rookie adventurer. To someone that is vastly experienced, more than someone one like Aiz, who worked her way up to the level that she is currently at. Bell on the other hand, had it handed to him. With his special abilities – which is kind of strange as the series was always putting Bell as this under-dog hero. Bell looked up to Aiz. The series built her up as this powerful adventurer at the beginning, but gave her very little characterisation. So rather build up her character, they just nerfed her to the ground – to the point of being irrelevant later on. Which is pretty sad to see. The series dedicates an entire episode on some of the secondary characters, giving us some background information on them. By the next episode however, were consequently dumped and forgotten about. No mention of it, whatsoever. And they serevely lacked any development. In essence, a lot of the secondary characters were just there for the sake of plot advancement (if you can spot a plot that is). Lili certainly showed some spunk, too bad she was shoved in the background. 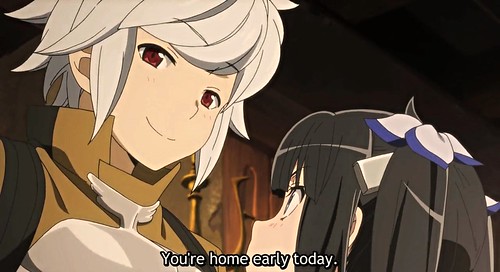 I certainly enjoyed Bell and Hestia jig in the intro. As for interactions, ..okay blatant romantic feelings for Bell from Hestia. It was awfully on sided. As it seems it is obligatory for our male leads in most shounen shows to be gracefully naive / blissfully unaware of the female leads feelings. Hestia’s reaction to other girls showing any interest in ‘her man’. Trying to scare away the “miss-hissy” and failing at the same time. At first it was funny, but after awhile it lost its novelty, it got really repetitive. And predictable. When it came to Aiz Wallenstein. Her infamous line “Aiz Whats-her-name” is pretty memorable. As for finding any of the characters relatable. Not really. Just the bit of Bell being an underdog. But other than that. I couldn’t find anything relatable from any of the characters. I wanted to, but I just couldn’t.

I enjoyed the opening Hey world – Yuka Iguchi. It has this really nice, catchy, happy feel. You can bop your head to it. And not feel like you have to get your adrenaline up, to get the feel of the song. The temp is nice and mild. Which kind of suits the anime overall. It isn’t too heavy in the action department. The ending is something to be desired for. The trumpet blaring is a nice touch.

The sound tracks, to me weren’t memorable at all. Further reinforcing as to what the show really is. 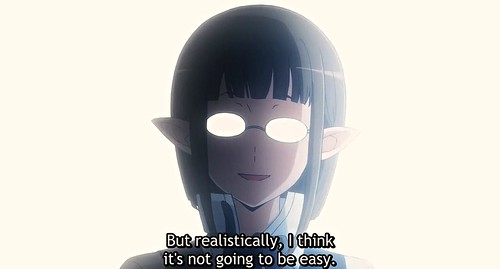 The series will be liked for a different reason altogether. And that would boil down to Hestia’ energetic, spunky, OTT feelings for Bell. And her (in)famous boob string. Them boobs are so huge, they have to be held up by a string. Which caused twitter to have a melt down (apparently).

Danmachi will be compared to SAO alot, this is due to Bell’ VA. Who does the voice of Kirito. I kind of feel bad for him as it seems he is forever type casted in these roles. He has done similar characters. Which are mostly harem based. So if you liked SAO. Then this series will do some good in filling in the void.

As I said at the beginning, I thought the series had its charm. Which made it enjoyable to watch. However at the same time, it’s very run-of-the-mill. And not memorable as a series. The 2 memorable things, that this series will be known for; Hestia and her boobs. And the jig. As to whether there will be a 2nd season, I’m inclined to say no to that. Due to on going material. And I’m not sure just how good the reception was for this series. Will there be a dub version?. Most likely.

You can read the grade I given it at the top. And for some special treat. You can enjoy this….

6 thoughts on “[Best of] Danmachi S1 – did this pick me up or did it leave me in the dungeon?”