This is an import from my old blog, yeah I know laziness. I decided to keep it the way it is, as I haven’t seen the series in a long time, still enjoyed it. Plus you get to see some of my old reviews / posts.

Life in high school is never quite easy. Nor the same. For most it can be quite a pleasant experience, for others something to forget and never go back to. Especially if it revolves around crushes, and loves. Ah, such adolescence and blissful youth experience. Such life, such memories…..

“Gouda Takeo is a freshman in high school. He spends his days peacefully with his super-popular-with-girls, yet insensitive childhood friend, Sunakawa. One morning, on the train to school, Takeo saves a girl, Yamato, from being molested by a pervert. Could this be the beginning of spring for Takeo?“

Oremonogatari’ narrative is very simple, and is more or less your typical shoujo high school romantic – comedy. However this series does have a surprising twist to it. And that has something to do with the main characters. That’s the main male characters. The story is told from the main character, Takeo Gouda point of view throughout the show. So we didn’t get to see much of the other characters point of view. But they did have these little think outs that did tell us what they were thinking at times. The narrative fitted in to each other nicely, over lapping each other at times. However they were predominately episodic. But still be able to tell a solid story.

I’m not in to shoujo, romantic – comedy shows. As I find them predictable, but this show caught my attention and it showed that with a slight twist, it can make a predictable show enjoyable and interesting.

The three main leads; Takeo, Suna and Rinko, designs were quite appealing – Takeo’s design can take you back a bit at first, but you do get used to it. What really stood out in Takeo’ designs was his ‘manly’ side burns. Suna with his stony / poker / calm face. And Rinko with her various facial expressions. The character personalities certainly matched their designs really well.

However the rest of the cast designs were pretty much standard affair. Not being memorable or unique for that matter. Just plain bland looking and personalities to match. The background weren’t memorable either. However the use of soft colours were used pretty effectively. I did find the art drop quality here and there. In essence, it stood out in some areas, but largely forgettable in most parts.

Takeo being one of the male leads did get growth as a character. But it was so minuscule; it was hard to tell if he did get any growth at all. Throughout the series, he learned certain lessons and then runs off to fix or sort the said lesson out. At first it was enjoyable. But then it got a bit repetitive after awhile – but not in a bad way. If anything it put his best qualities forward and in the spotlight. I can’t hold anything against that sentimentality as I probably would have done the same thing. Takeo being an altruistic character and being unfairly judged based upon his physical appearance, is something that I can relate to. His antics in being the “good heroic” guy, whilst has its good intentions, ends up backfiring, as most people are taken back or scared by his facial expression, which are pretty amusing. The reason why people are taken back; is due to Takeo’ imposing physique (tall, muscular, manly attitude, fierce facial expression). 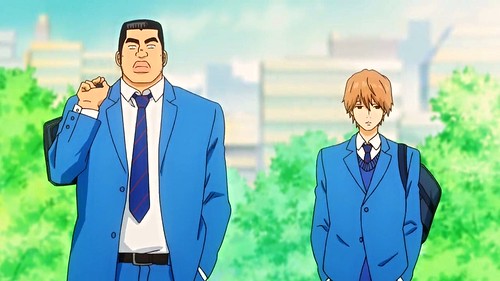 Suna as the second male lead did not get any growth whatsoever. For a second male lead, he was more of a secondary character that got thrust in to the main spotlight. This is due to the relationship with Takeo. Being the; cool, calm, intelligent and popular with the ladies. Suna never lauded or bragged about his popularity. One thing that never wavered in his character is his loyalty and devotion to Takeo. With Takeo being the only person to make Suna laugh.

One thing the show does establish. Is the sheer difference between the two male leads. Personality & physically wise, they are the perfect foil to each other. Suna is the brains, Takeo is the brawns. The set-up between the two is pretty much a cliché. But the show executes it pretty well. And it isn’t over done.

Rinko unfortunately didn’t get as much growth as she should have. The only time where she did get a small growth is when she felt strongly about her relationship. And the fact that she got various facial expressions, throughout the series were pretty cute.

The dynamics between the three characters were essential to the show and crafted really well, not over doing it.

The rest of the cast however were pretty much inconsequential. They served their purpose and the show makes no qualms about it. I did find Yukika Amami pretty creepy, as she stalked Suna for over 10 years. Having an unrequited love so to speak. Saijou Mariya did have an interesting dynamic with Takeo. But she too was pretty much shoved to the back. 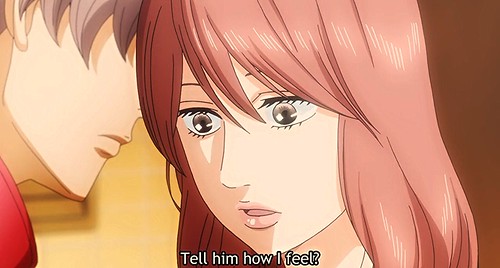 I did enjoy the opening Miraikei Answer (futuristic answer) by Trustrick. Nice and catchy and it sets the anime’ mood perfectly. The ending Shiawase no Arika (happiness hiding place) by Local Connect was also pretty enjoyable.

There weren’t any music used. Only a simplistic tune, which is pretty much overused throughout. Even though it is overused, it did enhance the emotions being shown in particular scenes.

I think the series will be enjoyed due to the twist. Even though the series uses a lot of clichés and repetitive jokes. And overtly simplistic tune. The one thing that might put them off is the over use of “I love her”, but this can be over looked due to the charm of the series. Takeo and Suna are the main reason why I think many would enjoy this series. It highlights their friendship and their life. With some really amusing flash backs.

The only problem I have with the series is that. Takeo isn’t all that bad looking. He is depicted as being unattractive, but his physique is muscular / athletic. As he participates in all of his schools sports activities. Compare him to Iwayama Tsuyoshi. Who isn’t as athletically built as Takeo. In essence what is seen as unattractive isn’t actually that accurate.

The telling of a great friendship and finding love, whilst growing up. Is something that is missing in most shoujo rom-com series. The series also points out what it’s like to be in a relationship and what it takes to make it work. Whilst most animes of the same genre, are building up to the relationship. Which makes it very predictable.

The entire premises of the show can be summed up with this sentence; it’s not what the outside that matters, but it’s what’s inside that counts.

Well you can read the grade I give the show at the top. Thanks for reading peeps, and I’ll catch you next time.